As I climb into bed, various opinions and pieces of advice that people have given me over the years flash into my mind. I recall their musings on my life and on what I should and shouldn’t be doing.

After bulldozing in with their tuppence worth, these supposed do-gooders continued on with their lives without a second thought. Meanwhile, I attached more value to their throwaway comments than to my own lifetime experience of being me.

I’ve spent long enough caring about how others perceive me. I’ve winced at their judgements, flinched at their criticism, basked in their compliments, and hoped for their approval.

Before taking action, I presumed how other people would react. This ineffective technique of mind-reading actually influenced how I was feeling and the choices I made.

Now in my thirty-fifth year on this planet, I’m finally getting sense. I understand that anything anyone says is coming from their perspective. People dish out suggestions that are based on a minuscule snapshot of my life. And even that tiny glimpse is filtered through the lens of their own history and beliefs.

Last night, as I walked alongside my sister, I was tempted to ask for her thoughts on something I’d spoken about earlier. But I realised that I would be doing it out of habit. It didn’t really matter what she thought about this subject. Getting her to advise me would be a waste of her energy because I knew that I would go with my gut anyway. And I mightn’t even want to hear what she had to say.

Not many people enjoy being told what to do. Nobody likes feeling judged either. And how can anyone know with absolute certainty what’s right for another person?  By doling out our opinions and “friendly” advice, we run the risk of blocking the flow of communication.

All we have to do is be there for one another. We don’t have to stress about giving the right guidance. What a relief not to have to be responsible for coming up with the answers or fixing everyone else’s problems.

Instead of handing out answers, start asking questions. This will facilitate lateral thinking, which will enable the other person to open up to previously unexplored options.

Support your friends/family/partners/clients in whatever course of action they decide to take. Listen to them. And more importantly, really hear what they’re expressing.

All we really want is for someone to just be with us and really hear what it is we’re saying. Because when we are heard, we feel understood. And when we feel understood by another human being, that is the beauty of true connection. 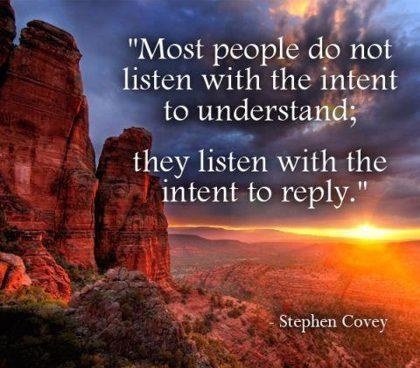