The last time I ventured to the pub was about three months ago with my then boyfriend in the Donegal Gaeltacht, where the most outrageous thing anyone did was speak English. The last time I got drunk was about six months ago with an old college friend, when we had Thai food with our wine and spent the following day blaming the takeaway for the annihilation of our insides (as you do). And I can’t even remember the last time I set foot inside a club. Does watching self-proclaimed guidos fist pump on Jersey Shore count?

And you know how when you haven’t done something in a while, you wonder if you could even remember how to do it? It’s part lack of energy after a recent flu; part rawness after a recent break-up; part fear- I think I’ve put on weight, I don’t have anything nice to wear, I don’t remember how to small-talk; part sense- memories of extreme exhaustion after a 7am finish, a night spent hugging the toilet bowl (it was a night on the tiles all right!), hangovers so bad you rue the day alcohol was discovered. Damn you, rotten fruit! And part downright laziness at the thought of having to choose an outfit, do the hair and makeup, and stand around in heels all night. Effort. I think I’ve developed a mental block. 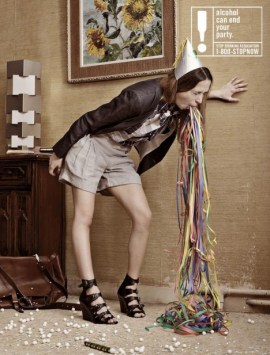 But after three weekends in a row of calling over to my mam’s for chips and a two-hour sentence of The X Factor, where the most daring thing I did was drink tea after 11pm, I think it’s time I worked on my social life.

I’m told I need to get out there (code for showcase my talents- I have a large chest- in order to date around). But do I really want to find a man in a swirling sea (maybe I shouldn’t have had that last Cuba Libre) of checked shirts and shark-like smiles? It’s dangerous choosing a partner when you’re both sporting beer goggles (Why do they call them beer goggles anyway? Goggles help you see. They should be called beer shades. Because they blot out the light. But I digress. I do that when I try to avoid an issue.)

On the one hand, I’m not bothered with all the pretending that goes on on a night out… fake tan, false eyelashes, concealer… pretending that everything’s funny, pretending that this club doesn’t suck rear end, pretending that you can walk in those heels and that your feet aren’t burning… Plus, I don’t want to get so drunk that I lose the following day (or my mammy’s chips).

On the other hand, I miss dancing to the latest Rihanna number, making an effort with my appearance and being told it’s paid off by a random hottie (even if he is hauled outside by the bouncers three minutes later for being too drunk) and cackling at dirty jokes with a gaggle of mates.

I don’t have to drink too much (famous last words). My eyelashes and tan (or lack thereof- I didn’t have a sun holiday this year, okay?) will be real. And I might wear flats. Who’s with me?

7 responses to “On the floor”