As I binge on this hilarious reality TV show, I laugh a lot. But I also shed a few tears.

I can see the beauty in every single singleton. The daters differ in appearance, creed, age, personality and life experiences. But they’re so similar too.

They’re all self-conscious. They all have fears and insecurities. They’ve all lived through hardship, be it heartbreak, illness, loss or rejection.

And they’re all holding on to hope. Hope that they’ll finally find connection, affection, partnership and love. They all want to share their lives with that special someone.

One man, who’s been single since his diagnosis with HIV five years ago, admits: “I just want to be loved.”

This heartwarming show highlights how quick we are to judge our potential partners. I don’t like his receding hairline. I prefer women with smaller bums.

Interestingly, we’re also quick to judge ourselves. I’ll lie about my job because I don’t want to put him off. She’ll never agree to a date because of my height. I’m punching above my weight with her. I’m not as skinny as the other girls.

I also believe that we get what we give. So when we give love, we receive it.

I have a friend who loves her dogs more than anything. Recently, I spent an evening at her home. One of her dogs burrowed his way into my arms. Later, he lay on my friend’s lap, his body splayed open, as my friend hugged and kissed him.

It struck me that this dog is full of love. He’s open and trusting and loving. And it’s such a good feeling to have him in your arms.

And my dog-loving friend is perfectly at ease with herself. She’s open and happy and loving. And when I’m around her, I am too.

It’s so easy to give love to a person who’s open to receiving it. And when someone gives love with unconditional abundance, being a recipient of that love feels effortless and unselfconscious.

It’s when the fear takes hold and the thinking starts and the barriers come up, that we block the love. We’re afraid to give love in case it’s thrown back in our faces.

But my advice now is to give love. Give love to yourself. To your friends and family. To your pets and your plants. To everyone you encounter.

Be yourself. Be open. Be present.

Give love. Accept love. Be love. And I guarantee that you’ll experience love.

P.S. When searching for an image for this article, I browsed the internet. Suddenly, I realised that I’d forgotten to type “Love” in the search bar. “Have I put love in?” I asked aloud.

Have I put love in indeed.

One of the biggest things I’ve struggled with over my lifetime is fear. Over the past few days, I’ve examined this fear and I’ve discovered that it has many, many layers.

There is fear of making mistakes. Fear of doing it wrong. Fear of failure. Fear of getting into trouble. Fear of criticism, disapproval and rejection. Fear of my own feelings. Even fear of happiness in case it were to disappear.

Fear of losing hope. And fear of having hope because I’m bound to destroy it.

As I shower this morning, I realise what’s really lurking behind all this fear. It’s fear of being found out. Found out to be stupid, incapable, ugly, unlovable.

And so this fear has prevented me from going for jobs, moving abroad, writing a book, staying in relationships, opening up to friends, and telling people that I like them. In short, fear has stopped me from putting myself out there.

Once I make this discovery, I can logic it. What is it about stepping out that I’m so afraid of? That people will discover that I’m human? Scared? Imperfect?

Aren’t these the things that I love and admire in other people? Don’t we feel more connected with other human beings when we realise that we’re all the same? Real and brave and frightened?

If I can accept others for how they are, why do I resist doing the same for myself? Why are my standards and expectations for myself so ridiculously high? Is it because I don’t like myself enough or is it because I like myself so much that I want to be the best that I can be? Interesting because this desire is actually blocking me from doing just that.

Over the Christmas, I read Marianne Williamson’s A Return to Love: Reflections on the Principles of A Course in Miracles. Once I delved into the first chapter, I was hooked. Marianne speaks about being paralysed with terror. She writes:

“You’d think we have some compassion for ourselves, bound up in emotional chains the way we are, but we don’t. We’re just disgusted with ourselves, because we think we should be better by now. Sometimes we make the mistake of thinking other people don’t have as much fear as we do, which only makes us more afraid. Maybe they know something we don’t know. Maybe we’re missing a chromosome.”

And I compare myself unfavourably with the whole human race. I neglect to focus on my own courage and achievements, which are many.

I dismiss my own journey and instead listen to the family members and neighbours as they comment on So-and-so’s flourishing business and Thingymajig’s promotion and new home and Yer-one-down-the-road’s wonderful partner and family.

“They’re doing so well”, they gush. And I hate myself a little more. I see other people’s highlight reels on Facebook and I wince in self-judgement.

Last night, I lay in bed reading Oprah Winfrey’s lovely book What I Know For Sure when I had an Aha moment. Oprah speaks about her fear of seeming arrogant. She writes:

“In some ways, even my weight was my apology to the world – my way of saying, ‘See, I really don’t think I’m better than you.'”

When I was younger, I was teased for being “posh” and using big words. I was also teased for having a rather large bosom for a 13-year-old. And I was beaten up because a girl’s boyfriend fancied me.

After those experiences, I was careful with my language and I tried not to appear full of myself. I changed the way I behaved depending on the group of people I was with. I didn’t flirt. And I made sure not to do anything too different so that I could avoid unwanted attention.

When other people were miserable, I downplayed my contentment and instead broadcast my difficulties. You see, I’d say. I’m not a threat. So you can like me.

Now that I understand where all this fear comes from, I have a choice. I choose to no longer allow fear to immobilise me. I want to take risks and move forwards and flourish. And I understand that I do love myself. I’ve just been confused about how to show myself this love.

The trick is to understand that we all feel fear. Our bravery lies in our ability to push forth anyway. In Oprah Winfrey’s words:

“Sometimes moving on terrified me. But it always taught me that the true meaning of courage is to be afraid, and then, with your knees knocking, to step out anyway.” 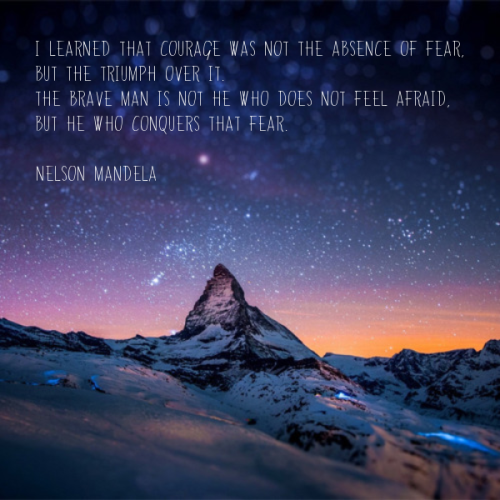